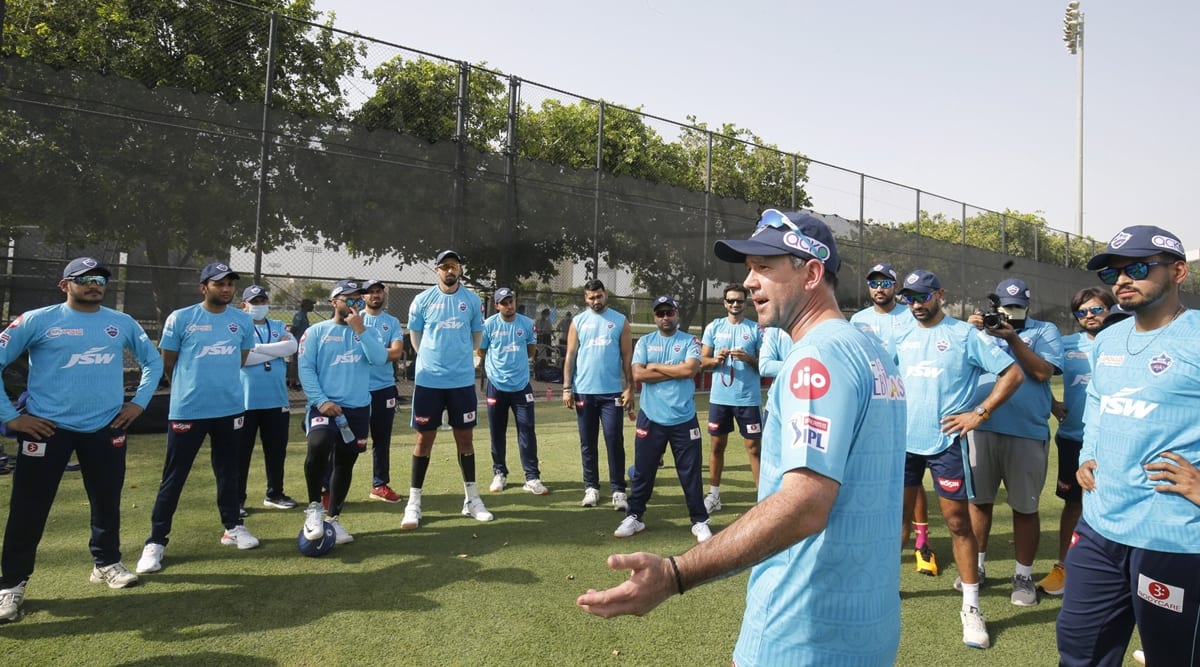 Ricky Ponting with Delhi Capitals in the UAE

In an interview with The Indian Express, former Australia captain and Delhi Capitals head coach Ricky Ponting spoke about his team’s preparation in the UAE and how Australian cricketers have gradually embraced India. Excerpts:

Q: Delhi Capitals have been an evolving team. How do you look at the continuity aspect?

A: Last season was great for us. We had lots of great individual performances right through the season. This year, as the IPL does, it brings up new challenges. We have got quite a vast change of personnel in our squad. We have added a couple of very experienced Indian players in (Ajinkya) Rahane and (R) Ashwin, who will bring in a lot of experience and quality into our group.

Overseas players have changed. Marcus Stoinis, Alex Carey, (Shimron) Hetmyer, (Daniel) Sams, (Anrich) Nortje; these sorts of guys have come into our squad. Continuity, probably, isn’t there as much as we would have liked. Even our fast- bowling coach last year, James Hopes, pulled out for personal reasons and our spin-bowling coach Samuel Badree was unavailable for personal reasons. So things have changed a little bit, but I think a lot of that has changed for the positive and I’m really, really excited for what the next seven or eight weeks would bring for Delhi Capitals.

Counting down the days until we start our season on Sunday. The boys have been outstanding with their training and preparation and competition for spots in the starting eleven is certainly hot. Exactly what you want as a coach. @delhicapitals pic.twitter.com/4PHBDTAA3p

Q: Do you think your fast bowlers can be that effective on UAE pitches?

A: Right now, we have almost had three weeks of practice so far. We have moved around the venues as well. We have trained in Sharjah. We have trained in Dubai, at the Academy ground. So, we haven’t actually been to the main ground in Dubai yet. We don’t really know exactly what the wickets are going to be like. Whenever you are going to an auction, it’s generally picking a squad of players that you think will serve you well in your home conditions. But I think we have got most bases covered.

We saw how damaging (Kagiso) Rabada was last year at the Kotla and that was a slow, low pitch. I think these wickets will probably be on the slower side but will offer a little more bounce. That actually suits guys like Rabada, Nortje, Ishant Sharma, Avesh Khan, Daniel Sams. And as the tournament goes on, the wickets will probably change. They might spin a bit more in the back half and we have got a very well-balanced and very experienced spin-bowling group as well, with Ashwin, (Amit) Mishra, Axar Patel and (Sandeep) Lamichhane. We think we have come up with a really well-balanced squad.

Q: How do you think T20 batting has evolved over the years?

A: If you think through the very best T20 players in the world right now, they do have a great mix of the conventional and the unconventional (shots). Virat Kohli still plays a beautiful cover drive. AB de Villiers does play beautiful cover drives. Steven Smith, David Warner – these guys still hit beautiful shots square of the wicket (off) the front foot and back. They have the ability, probably later in the innings, to clear the boundary line as well.

Someone like Rishabh Pant, he has got slightly more unconventional shots. A lot of his shots are more aerial. But that’s the role he plays in our team. If you think about someone like Shikhar (Dhawan) or Prithvi Shaw, they are mixing the conventional with the unconventional as well. So, there’s still room for those types of players. The T20 game, or the white-ball game, has become so much more power-based now, batting is becoming a lot more like baseball.

Really hard to leave my family behind at this time, but next stop Dubai. See you soon @delhicapitals pic.twitter.com/NKfE3JtLeY

Q: Did you change your shot-making for T20 cricket?

A: I didn’t get a chance to play a lot of T20 cricket. When I did, I was probably sort of past my prime as a player. The trademark shots that people probably think of me are the pull shot first and foremost, and straight drives and on-drives. Those shots didn’t change too much throughout my career. I guess at the back end of my career, probably more so in one-day cricket, I started hitting more lofted shots down the ground and over mid-wicket. I was never particularly strong, sort of lofting the ball over the off side. If I would have been maybe 10 years younger, then you probably would have seen me playing a lot of different shots, maybe more lap shots that a lot of modern-day players are playing.

Q: When did Australian cricketers’ perception about India start to change?

A: Not (it happened during/after) one particular series. But I think, as India emerged as a global powerhouse in the game, Australia, any association (cricket board), wanted to be a part of that journey, I guess. I think, since maybe the late 1990s or early 2000s, Australia have made a tour to India, a Test tour or a one-day tour, pretty much every year. There has been an Australian tour to India or an Indian tour to Australia.

I think the IPL has done an amazing job to be able to bring players from Australia, England, New Zealand, South Africa, West Indies and Sri Lanka. They bring over these players in one place for a couple of months a year and get those cultures, (the opportunity) to understand each other. India has had so much to do with the economic growth of cricket all over the world. The IPL, I think, is still the best domestic tournament that we play.

Q: Even former Australia cricketers are coming to India a lot more for commentary and other assignments.

A: The first few tours that I had in India were a huge culture shock for me. Growing up in a little state of Tasmania, with a population of sort of 500,000 people; all of a sudden in the middle of Mumbai or Chennai, where you got 20-odd million people around you. It was a massive culture shock.

But I always tried to understand the culture and the people better. It was always hard to play good cricket if you didn’t understand what was going on around you. And I think that’s still a great challenge for every young Australian that tours India, learning as much about the culture as early as you can. If you do that, then I think the cricket side of things becomes a bit easier for you.